Off-label prescription of medicines: what do we know about the legislation in EU member states?

© The Author(s) 2021. Open Access This article is licensed under a Creative Commons Attribution 4.0 International License (https://creativecommons.org/licenses/by/4.0/), which permits unrestricted use, sharing, adaptation, distribution and reproduction in any medium or format, for any purpose, even commercially, as long as you give appropriate credit to the original author(s) and the source, provide a link to the Creative Commons license, and indicate if changes were made.

Aim: Off-label prescription is not regulated on the European Union (EU) level and therefore not harmonised in the EU Member States (MS). Despite this, the use of medicines outside of the drug label occurs in clinical practice, and it can be included in treatment guidelines and/or reimbursed in some cases. It is, however, currently not clear to what extent off-label use can be included in regulatory discussions at a European level at the different committees at the European Medicines Agency. In this article, we provide an overview of the current legislation on MS level regarding off-label prescription in order to support EU regulatory discussions.

Methods: Relevant national legislation regarding off-label prescription from MS was identified by distributing a questionnaire to EMACOLEX. Case law was excluded. The identified categorical elements and prerequisites in the national legislation were then categorised. Subsequently, a comparison was made to the five Good Off-Label Use Practice (GOLUP) principles.

We prepared a questionnaire consisting of four open questions about national legislation regarding off-label prescription [Supplementary Material 1]. This questionnaire was distributed among legal experts of the European Medicines Agencies Cooperation on Legal Issues (EMACOLEX). EMACOLEX is mandated to enhance trust, knowledge and confidence between legal staff in order to legally assist the European Medicines Regulatory Network and the national medicines agencies[14]. At least three email reminders were sent. Based on the EMACOLEX questionnaire, the national legislation references of the primary sources of national legislation - the laws in their original language - for each MS were identified. Subsequently, the acts and regulations that were indirectly or directly associated with off-label prescription were examined in English with the use of a translation tool, with exception of the Dutch legislation which was studied in the original language. Case law was excluded, because the legal status varies between the countries and in most MS it is published in the original language only. Despite the existing possibility for translation from the original language, we decided not to follow this approach as it is known that certain nuances can be lost in translation and hence lead to incorrect interpretation.

Identification of categorical elements in law from national legislation

The method for comparative legal research, as executed by Elkins et al.[15] in 2009 and applied by Voermans[16] in 2019, was used for the identification of elements in law that were associated with off-label prescription. The identified regulated subjects from the national legislation of MS were categorised into categorical elements in law and the frequency of each of these elements was counted [Figure 1]. 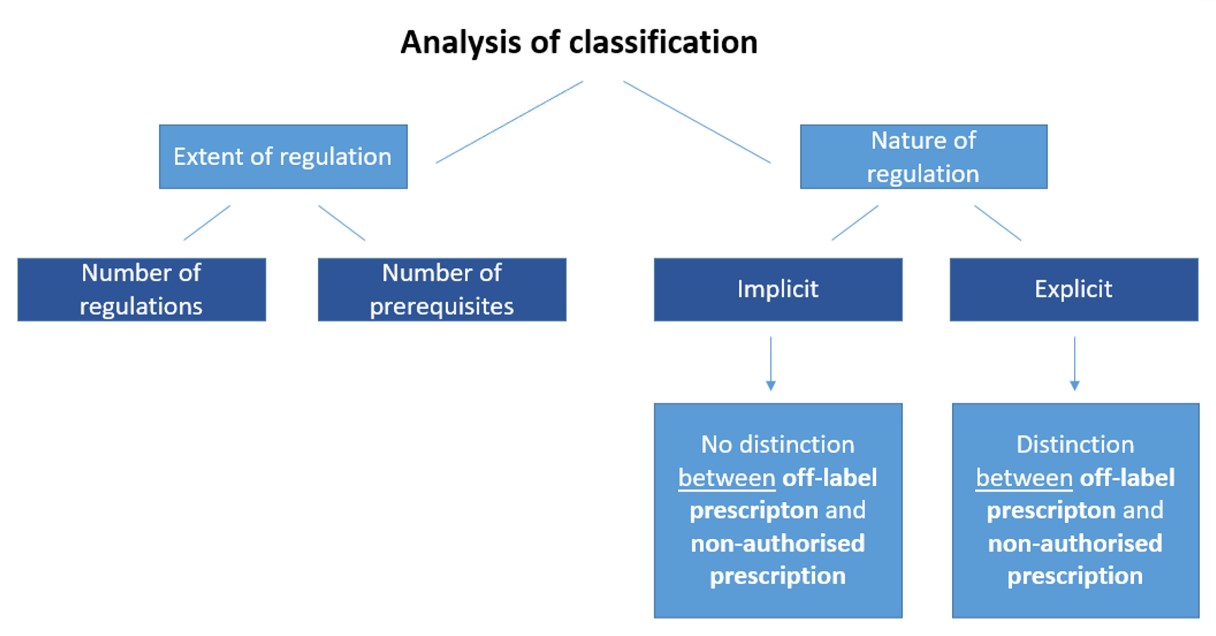 To assess the content of legislation, the prerequisites for off-label prescription identified in the national legislation of MS were related to the five GOLUP principles [Supplementary Material 3][13]. The frequency of each prerequisite was counted. GOLUP aims to create a harmonised approach on how and when off-label prescription might take place in the EU[13]. The five GOLUP principles are as follows:

1. “Presence of a medical therapeutic need based on a current examination of the patient by a suitably qualified health care professional”.

2. “Absence of authorised treatment and licensed alternatives tolerated by the patient or repeated treatment failure".

3. “A documented review and critical appraisal of available scientific evidence favours off-label use to respond to the unmet medical need of the individual patient”.

4. “Patients (or their legal representative) must be given sufficient information about the medicines that are prescribed to allow them to make an informed decision”.

5. “Presence of established reporting routes for outcomes and adverse events linked to off-label use”[13].

Responses were received from 10 EU MS and 3 EEA countries [Figure 2]. Since this research was initiated to inform EU regulatory discussions, the information from the EEA countries was appreciated but not included in the final analysis. In total, 24 categorical elements in legislation were identified. The full list of categorical elements can be found in Supplementary Material 4. Figure 3 displays the elements that were found in the legislation of two or more MS. In five out of 10 MS, there was no definition or reference to off-label prescription in the national legislation, whereas, in the other five MS, a definition or reference to off-label prescription was present. In five MS, “informed patient consent” was found. Categorical elements such as the “professional standards of physicians”, “responsibility in case of off-label prescription” and “notification of a policy organ” were found in the lowest number of MS. In addition, “Distinction” (five MS) and “No distinction” (five MS), respectively, refer to whether there is a distinction in legislation between non-authorised medicinal products and off-label prescribed medicinal products or not. This in fact categorises a MS as having implicit or explicit legislation. 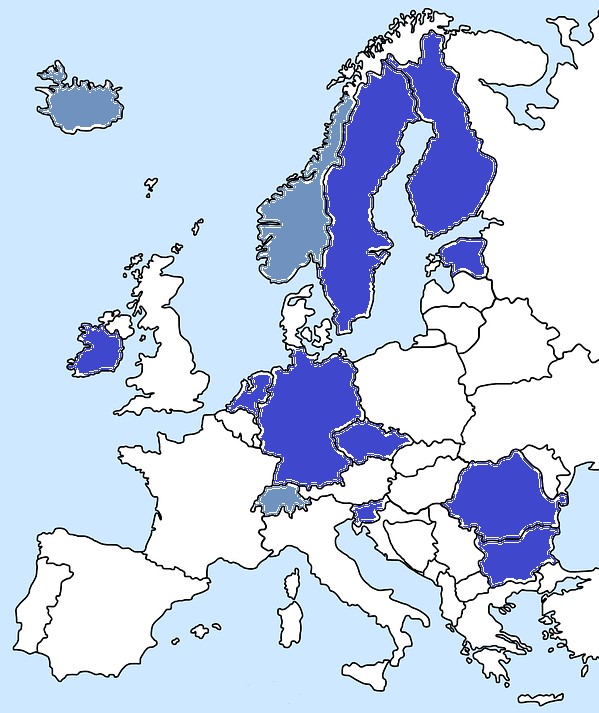 Prerequisites for off-label prescription, their frequencies and their relation to the GOLUP principles

The three most frequently applied GOLUP principles were: Principle 4 about informing the patient about the consequences of off-label prescription (nine times), Principle 5 regarding reporting outcomes and adverse events associated with off-label use (seven times) and Principle 3 concerning the scientific evidence for off-label use (five times). GOLUP Principle 2 about absence of alternative authorised treatments or repeated treatment failure was found only once. Bulgaria is the only MS that has included all five principles in their national legislation. However, all MS that have prerequisites for off-label prescription in their law (seven out of 10) have at least two prerequisites which are related to at least two different GOLUP principles, except for Germany that has two prerequisites that are related to the same GOLUP principle.

A comparison of the prerequisites in the different countries has shown different levels of similarities. For instance, Bulgaria and Sweden share three similar prerequisites (the highest “n” of similarities): “informed patient consent”, “scientific evidence” and “notification of a policy organ”. The last two are also found in the Czech Republic. Germany, Estonia and the Netherlands have two similar prerequisites: requirement for “informed patient consent” and “informing the patient about the consequences of the treatment”.

We studied the current legislation concerning off-label prescription and use of medicinal products in the distinct MS of the EU, which is of interest, as there is no EU legislation for off-label prescription. Hence, it is important to identify the exact nature of the national legislation in the different MS of the EU. Especially for marketing authorisation applications for medicinal products, it is currently not clear to what extent off-label use can be included in regulatory discussions at a European level at the different committees at the European Medicines Agency.

The lack of EU legislation and the current diversity of legislation regarding off-label prescription in the different MS leads to uncertainties. This issue was also flagged by Weda et al.[10] in their study from 2017. They investigated 24 MS and found that 10 MS have regulations concerning off-label prescription of medicinal products, while 14 MS do not have such regulations[10].

This study has some limitations. The first is that the analysis is based on 10 of the 27 MS which responded to the questionnaire. Consequently, it is unclear whether the regulation in these MS is representative for the whole EU. However, based on these 10 countries, it can already be concluded that off-label prescription is very heterogeneously regulated. The second limitation is that only the legislation of MS was taken into account. Case law was excluded, for reasons already explained. It could however contribute to a more complete picture of the off-label prescription regulation throughout MS in the EU.

We thank the Members of the EMACOLEX for their participation in the survey. In addition, we appreciate the discussion meetings we had with Michael Klos (Leiden University, Faculty of Law, Department of Jurisprudence) and acknowledge him for his very useful feedback.

Collected the data and performed the primary analysis: Caminada R

The data supporting this research can be found in the Supplementary Material.

All authors declared that there are no conflicts of interest. 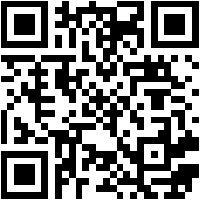