Audiological findings in an Indian child with Johanson-Blizzard syndrome: a case report

© The Author(s) 2022. Open Access This article is licensed under a Creative Commons Attribution 4.0 International License (https://creativecommons.org/licenses/by/4.0/), which permits unrestricted use, sharing, adaptation, distribution and reproduction in any medium or format, for any purpose, even commercially, as long as you give appropriate credit to the original author(s) and the source, provide a link to the Creative Commons license, and indicate if changes were made.

Johanson-Blizzard syndrome (JBS) is a rare autosomal recessive disorder characterized by multi-system involvement and facial dysmorphic features. Sensorineural hearing loss is one of the most common manifestations of this pathology. Detailed audiological evaluation in confirmed cases of JBS is essential for the appropriate management of hearing loss. We present the audiological features of a six-year-old Indian girl with Johanson-Blizzard syndrome along with the less emphasized association of café-au-lait spots with JBS.

Johanson-Blizzard syndrome (JBS) is a rare autosomal recessive disorder, first described in 1971 by Johanson and Blizzard. It is a very rare multi-system disorder, comprising a wide range of abnormalities including exocrine pancreatic insufficiency, aplasia or hypoplasia of the alae nasi, scalp defects, developmental delay, microcephaly, mental retardation, absence of permanent teeth, sensorineural hearing loss, hypothyroidism, urogenital malformations, imperforate anus, and congenital heart defects[1-3]. The UBR1 gene located on chromosome 15q15.2 is currently the only gene associated with JBS[4]. As per the National Organization of Rare Disorders, JBS affects males and females in equal numbers. Although the exact incidence is unknown, the frequency has been estimated to be 1 in 250,000 births[5] with no reported gender differences. However, no reports on the incidence and prevalence of JBS in the Indian context are available. One of the most common manifestations of this pathology is sensorineural hearing loss (SNHL) of different severity and anomalous development of the inner ear. Sensorineural hearing loss occurs in more than 80% of cases of JBS[6].

There is a dearth of literature reporting audiological findings on JB syndrome. The present case report is one of the first attempts to report the audiological features of an Indian child with JBS with a rare association of café-au-lait spots.

The case presented in this report is a six-year-old girl who was referred for detailed audiological evaluation and further management with a genetically confirmed diagnosis of Johanson-Blizzard syndrome. She presented with not hearing and not speaking age appropriately. Her history and medical records revealed she was born out of a consanguineous union and a full-term normal delivery with an immediate birth cry and a birth weight of 2.45 kg. She suffered from secondary apnea requiring resuscitation and neonatal intensive care unit stay for the same. She had no family history of any major medical or genetic disorder. She had clinodactyly of fifth fingers bilaterally and her echocardiogram revealed an atrial-septal defect with persistent ductus arteriosus. She was reported to have normal TSH and a normal 46, XX karyotype. Homozygous mutation of UBR1 gene was detected through molecular genetic testing, thus confirming the diagnosis of Johanson-Blizzard syndrome. She failed the otoacoustic emission screening at the age of 12 days and was reported to have sensorineural hearing loss confirmed by brainstem evoked response audiometry (BERA) at a different medical center.

At the age of three months and six days, she presented to our institute for a detailed audiological evaluation. Her hearing evaluation revealed bilateral severe to profound sensorineural hearing loss confirmed by BERA. Aided behavioral observation audiometry was carried out, and, based on the aided responses and real-ear measurements; the child was fitted with conventional hearing aids bilaterally. The child was recommended for auditory verbal therapy; however, she did not follow up.

The case was lost to follow-up for five years. She reported to our institute again at the age of five years six months to seek admission to the special school for children with hearing impairment on our institute premises and was referred for detailed audiological evaluation as a protocol for school admission. Her mode of communication was mainly by pointing and responding to simple commands by gestures. She had striking facies with a small beak-like nose with hypoplastic nasal alae, absence of permanent teeth, and café-au-lait spots were observed on legs and few spots on hands [Figure 1]. 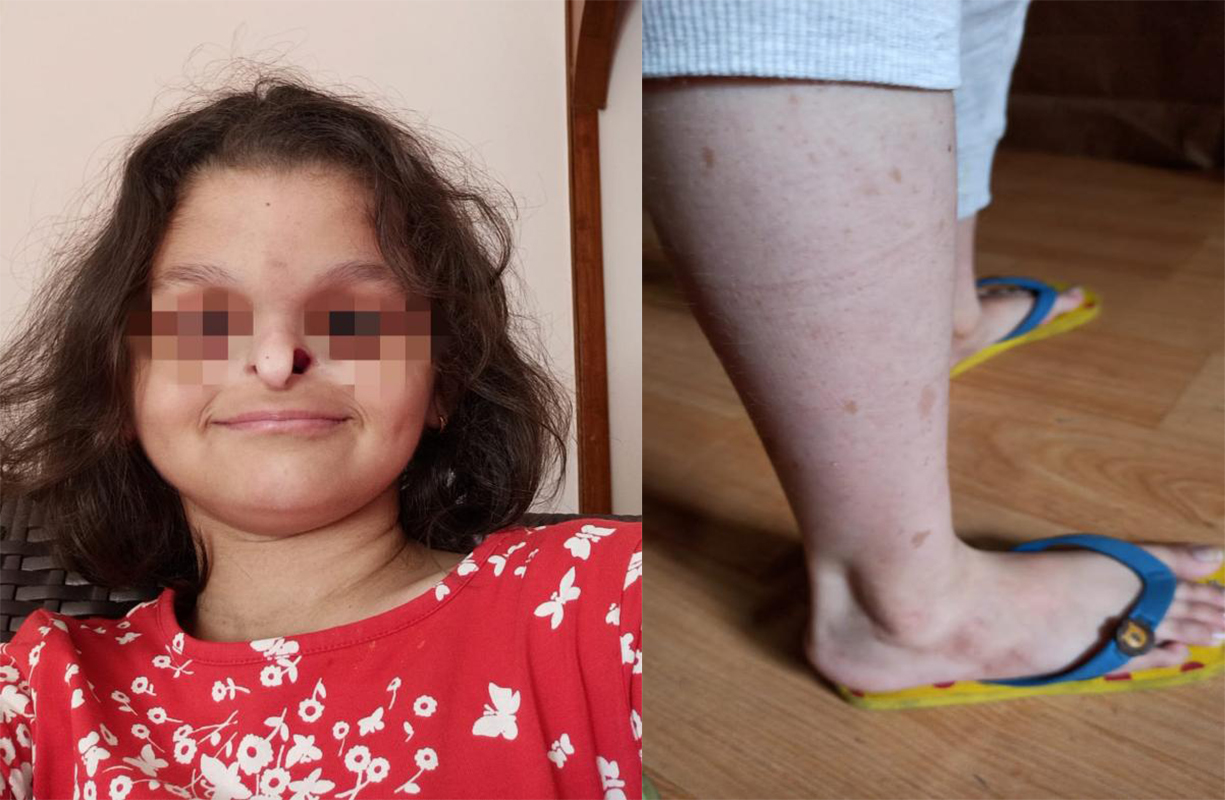 A thorough audiological evaluation was carried out. Otoscopic examination revealed the presence of a bilateral cone of light. The middle ear analysis was done using tympanometry, using GSI Tympstar Pro-GSI Grason Stadler with a 226 Hz probe tone, which revealed normal middle ear functioning with bilateral “A” type tympanogram. Reflexometry obtained bilaterally to ipsilateral and contralateral stimulation showed absent acoustic reflexes on ipsilateral and contralateral recording [Figure 2]. Pure tone audiometry (PTA) carried out using a GSI-61 audiometer revealed severe hearing loss in the right ear and profound hearing loss in the left ear. Similarly, there was no response to bone conduction stimulation of the right ear from 250 to 4000 Hz [Figure 3]. Distortion product otoacoustic emissions (DPOAEs) were recorded bilaterally using an ILO V6 instrument with a frequency range of 1000-8000 Hz. DPOAEs were absent bilaterally across all the frequencies, suggestive of outer hair cell dysfunction in both ears. 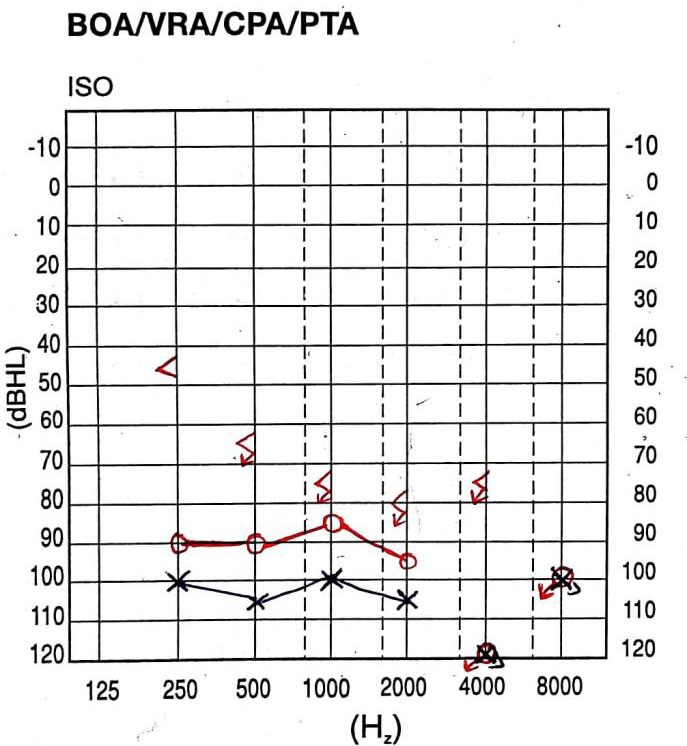 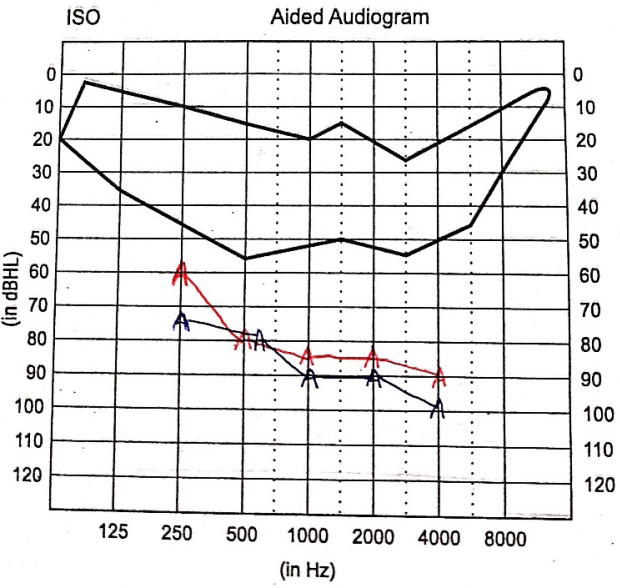 Radiological investigations (CT and MRI brain and temporal bones) were carried out, which revealed a common cystic cavity of the apical and middle turn of bilateral cochlea with normal basal turn and enlarged vestibule typical of Mondini dysplasia.

The outcomes of this study show the importance of doing a systematic and comprehensive auditory, speech, language, and psychological profiling in children with JBS, which aid in tailoring the management. Facial dysmorphism is one of the constant signs required to make a diagnosis of JBS. A small beak-like nose with hypoplastic nasal alae, absence of permanent teeth, and café-au-lait spots were observed in the present case. The association of café-au-lait spots with JBS is not emphasized in the literature[1,2]. Although Johanson and Blizzard[1] originally reported this in the second case, other authors have not consistently reported this. The presence of a significant number of café-au-lait spots in the present case is an interesting, rare association noted with JBS.

The current study’s findings are consistent with a number of syndromic hearing loss cases involving the inner ear. Otic capsule (inner ear), nasal alae, and mandible are ectodermal in origin[11]. Thus, aplastic nasal alae and Mondini dysplasia along with the presence of severe to profound SNHL can be related manifestations of ectodermal dysplasia.

The use of amplification devices such as hearing aids is recommended to manage speech and language manifestations caused by the disorder in mild to severe SNHL of syndromic origin[8,12]. Despite the use of hearing aids, the aided responses, in this case, were unsatisfactory due to the presence of bilateral Mondini dysplasia.

In conclusion, the current study is one of the first to report JBS in an Indian child with systematically reported audiological, speech, and language features and café-au-lait spots, a rare and less emphasized association with JBS. The findings of the current study show compromised auditory function in JBS. It also points to the necessity for the involvement of an allied professional team to effectively screen, counsel, and rehabilitate children with JBS before they cross the critical age, which can help to speed up both rehabilitation and audiological outcomes.

The authors would like to thank the family for their kind cooperation.

Conception or design of the work: Rashmi Bhat, Deena Priya

All authors declared that there are no conflicts of interest.

Written informed consent to participate and consent for publication from the patients was obtained. 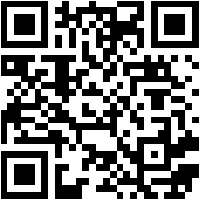